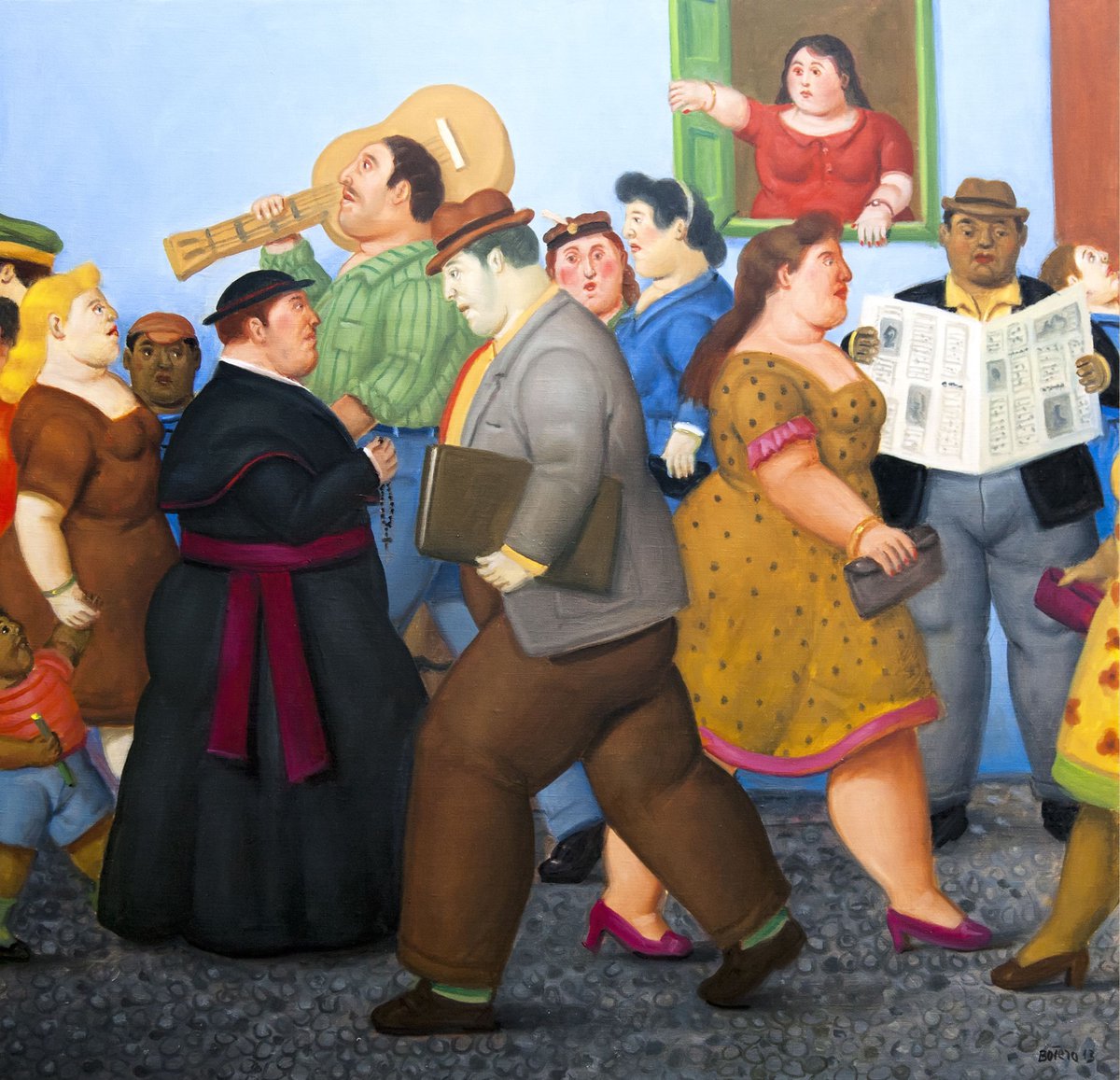 The Street, by Fernando Botero

Streets, parks, public gardens and greens, squares, promenades, river walks and woodland trails. There are a whole multitude of spaces between buildings in the city, and at the time of writing with our access to these public spaces limited, their importance to us as places where we can meet others, relax or exercise, be surprised by something or be reminded of our past; is all the more felt.

When Henri Lefebvre wrote in the late 1960s about “The Right to the City”, it is access to these feelings and stimuli that he was referring to. The capacity for spontaneity and for the unexpected as well as the anticipated, such as the flows of rush hour or the chiming of the town hall clock, enrich our experience of the everyday. Everyone should have the right to these experiences and should benefit from these qualities of the built environment.

“Among the requirements that are satisfied, in part, in public spaces are the need for contact, the need for knowledge, and the need for stimulation.” Life Between Building, Jan Gehl

To create public spaces which are truly inclusive for all, what if we started by asking an 8-year-old and 80-year-old about their needs and desires? In giving these two people a voice, perhaps we could discover ideas to improve public spaces for all? We could ask about how they move and navigate through public spaces and begin to understand the challenges, the innovations and subversions they’ve developed to get by and what could be improved to increase their mobility further. We could ask them both about their presence and representation in public spaces and discover their wishes for opportunities to play, for contact, for places of rest as well as spaces for expression. This change of emphasis has been suggested in the past by designers and writers alike. In his book The Child and The City, Colin Ward makes the case for the ‘Sandbox City’, reimagining the city’s public spaces themselves as the playground for the child, rather than relegating play to a designated area.

In advocating for the representation of children in the city, Ward’s argument goes beyond play in and of itself. He writes also of the capacity for the city and its public spaces to act as places for learning, “The city is in itself an environmental education, and can be used to provide one, whether we are thinking of learning through the city, learning about the city, learning to use the city, to control the city or to change the city”. Thinking of public spaces such as parks, streets and squares as places where knowledge is gained and exchanged reaffirms the importance of accessibility to and within these spaces. Both the 8-year-old and the 80-year-old have much to gain and to offer in being part of these interchanges.

“The city brings together people who are different, it intensifies the complexity of social life, it presents people to each other as strangers” The Craftsman, Richard Sennett

In summarising the key ideas of the book, Ward concludes frankly that, “Most of the environmental policies which would improve the lives of children in our cities would benefit adults too. In particular, everything that would make the city a more tolerable place for the old would make it more enjoyable for the young.” In this, Ward identifies the common cause of children and older users of the city and suggests that meeting the demands of these groups would lead to a richer public realm for all.

More recent publications such as the Parliamentary Office of Science and Technology (POST) 2016 report on creating ‘Age-Friendly Cities’ and United for All Ages’ “Together in the 2020s” continue to support this approach. Both reports highlight the UK’s ageing population and the requirement for public spaces to be adapted and cater for a much greater number of elderly users. Importantly, they identify these improvements not solely as imperatives for one sector of society, but as opportunities to improve public spaces for all and actively promote intergenerational interaction. Published in 2020, the GLA’s guide to ‘Making London Child-Friendly’, which was co-written by Erect Architecture and Publica, makes a similar argument from the other end of the age-spectrum; that in making our cities child-friendly, we will also unlock potentials for all ages and all users of public space.

Over the coming months, Erect Architecture is embarking on a research project to discover more about the age-friendly city and the design of public spaces which is open equally to the 8-year-old and the 80-year-old. Returning to seminal texts such as Colin Ward’s, as well as reviewing current reports and policy guidance from the UK and internationally on age representation in the city, we aim to formulate new lessons for the creating the 8 to 80 city, a city for all.